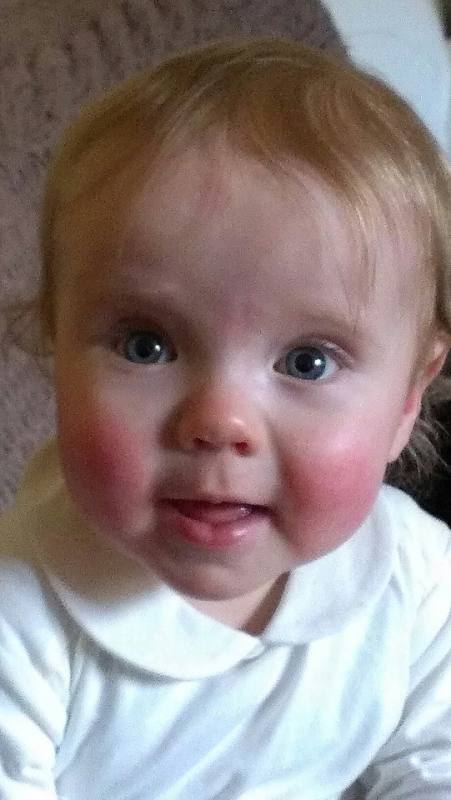 been unwell for a few weeks leading up to having Niamh and as she was my first I just thought all the symptoms I was experiencing were normal. However after visiting family at New Year I came back to a Midwife appointment and as soon as she saw me I was sent to produce a water sample, and my husband Chris was being told that I would be heading to hospital that day. Te midwife thought I had Pre-eclampsia my sample had 3 x protein, which I believe is high.

I was taken into South Tyneside hospital on the Thursday and put onto a ward. After a few hours of nurses taking my blood pressure regularly and monitoring Niamh, I was taken to one of the delivery suite rooms which is where I was until the Saturday when a bed became available at the RVI. At this time I knew I was unwell but was happy as I was told that Niamh was still fine and more than likely didn’t fully understand/take in what was happening. I became more unwell in the early hours of Sunday morning and the Doctor decided it was time that Niamh met us early. So she was born at 11:29 on Sunday 12th Jan 2012 via C section as I fell in and out of sleep. She then said a brief hello as she went past us to get ready to be taken down to the SCBU.

She was originally on CPAP and doing well, however the following day (The first time I was taken to see her) as I was wheeled in her alarms went off and lots of nurses and a doctor were suddenly around her and we were asked to wait in the waiting room around the corner. The doctor came in after about 40 minutes but what seemed like a life time and told us that Niamh’s heart had stopped due to a deflated lung wrapping around it and that they had managed to revive her and that she now had chest drains and was on a ventilator. As all this was being said I really wasn’t taking in the full severity of everything and still now get hit with it every now and then.

The first time I was with her I couldn’t get over how tiny and hairy she, all the tubes and wires surrounding her were very scary.  The following day Chris came down with adult chicken pox so he was not allowed in to the hospital to see her or me.  Niamh then had a very busy week as she wasn’t accepting her milk, needed a UV lamp and wasn’t responding to the medication which was a frightening time. Then all of a sudden she turned a corner and started to respond to her meds, then accept milk (slowly) but as anyone that has had a premature baby knows it is these small things that lift your spirits.

Once this happened I was allowed to start doing her cares myself (which I didn’t want to do at first. The nurse looking after Niamh showed me for a few days as I was far too scared I’d hurt her or pull a tube or wire but once I started doing her cares it was the favourite part of my day and helped me get to know her.).

Then my all-time favourite thing happened a week later and I got to have my first cuddle (Kangaroo Care) which was bitter-sweet as Chris wasn’t there to share this with me.  Not long after this Chris was passed by a Doctor to visit again and on that day the Doctor came to see me and wanted to discuss Niamh. We were taken into a room off to the side of special care and told that Niamh had a bleed on her brain and that we would not know the full damage to her until she started to develop, but because of the type of bleed, she more than likely would have some form of cerebral palsy.

A couple of days later I was sent home, which I cannot describe as it was so hard to leave my tiny baby without her Mummy in this big hospital, even though I knew she was in the best place possible. We visited daily and spent as much time as possible with her, where we as parents grew in confidence and Niamh improved so much that the doctor started to discuss moving her to South Tyneside as soon as a space became available. She spent a further 7 or so weeks there and was sent home a week before her actual due date of 23rd March which was both an exciting and frightening day but we’ve never looked back. It has since came to light that Niamh has a mild form of CP which at the moment affects her left hand but she is full of fun and very strong willed.

We will forever be grateful to the doctors, nurses and staff at SCBU in the RVI for saving our daughters life and showing so much care to her and for the amazing work they do.

We would also like to thank Tiny Lives for the support and help they give to the unit, the babies and the parents. Niamh still sleeps with her Tiny Lives bear in her cot to this day!