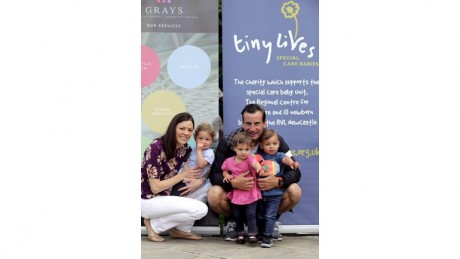 Aimee, Louis and Sofia, made their entrance into the world almost 8 weeks early, weighing just 3lb 11oz, 3lb 3oz and 2lb 1oz respectively.  As it had been a triplet pregnancy we knew that the risks were high and that the babies would be born prematurely.

Immediately after delivery, Aimee, Louis and Sofia were taken to Ward 35, otherwise known as the Special Care Baby Unit (SCBU) at the RVI in Newcastle, where they stayed for between 5-6 weeks until they were strong enough to come home.

During those weeks we spent a lot of time in SCBU and got to see first-hand just how much incredible work is done there and how well all the staff on the ward look after the babies in their care. Unfortunately for many parents with babies in SCBU the journey doesn’t have the happy ending ours did, an ending we will be forever grateful for.

Joanne and Dylan chose to fundraise for Tiny Lives

“Whilst we can never repay SCBU for the amazing care, support and compassion they showed us, we’d like to go a small way to giving something back by raising money for Tiny Lives.”

To date, they have held several fundraising events to raise money for Tiny Lives – http://www.justgiving.com/AimeeLouisSofia